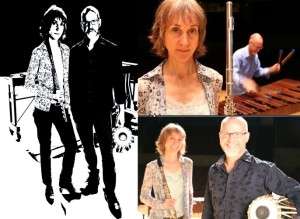 Southern Oregon-based duo Caballito Negro is known for its creative and compelling performances, generating a fearless, ecstatic blend of modern and traditional aesthetics. Multi-flutist Tessa Brinckman and multi-percussionist Terry Longshore draw their name (“dark little horse”) from Federico García Lorca’s poem, Canción de Jinete (1860). They collaborate with visionary artists, using an arsenal of instruments to push the artistic experience to new heights, and always in the spirit of duende.

Caballito Negro also composes as a duo, synthesizing their eclectic musical dialects. Their work as resident artists has been featured at the Ashland Independent Film Festival, Oregon Shakespeare Festival, Festival of New American Music, Britt Music & Arts Festival, as well as in many university, theater, and house concerts in the U.S. They share years of musical and life experience, in giving joint masterclasses to explore questions of intercultural exchange and hybrid forms.

Their first recording, the EP Songlines (2016), was praised for its “absolutely gorgeous tone”, “understated virtuosity” (Joshua Cheek) and being “expertly produced and played” (NFA Quarterly), featuring the music of William Kraft, David P. Jones and Ivan Trevino. Caballito Negro has ongoing recording projects for CD and video release in the near future.

IMPULSION is an international collective of artists based in France, which offers a seeing and hearing of today’s creative, modern and inventive music, and which is above all a sensitive conversation. The collective brings to fruition a beautiful melange of instruments, electronics, music, visuals and dance, in exalted sound and sensation.